This morning, I got up and showered, dressed, and ate. It was a big day for my mom… so we got in the car and drove to the mall. 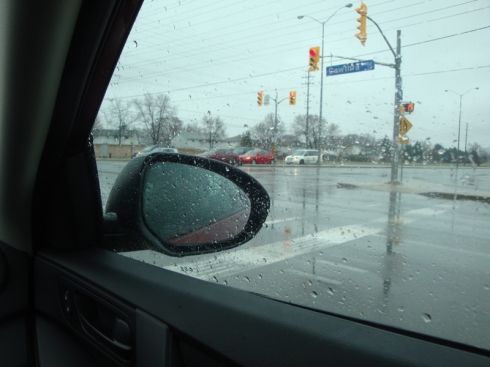 Of course, the sun is gone and it's raining!

We got to the Apple store and it was crowded!! My mom finally got her birthday/Christmas present:

One happy mama with her iPad

After it was paid for, she was assisted in setting it up and got a small tutorial on the iPad. It’s like a big iPhone of course… but there were some differences.

We got home and played around it until my dad got back from work. We had lunch plans to go to St. Lawrence Market in downtown Toronto. St. Lawrence Market has all kinds of foods and kitchen goods for sale, and there are also a bunch of restaurants.  We went to my parents’ favourite sea food place.

The crab cakes were sooo good

My dad had a salmon salad that was mouth watering! To the right is yummy calamari 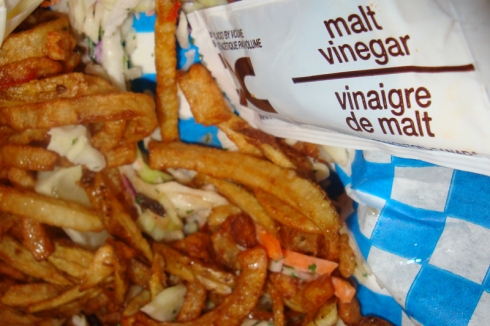 After lunch, we went to walk around.. my mom got some pasta sauce and fresh pasta to take home 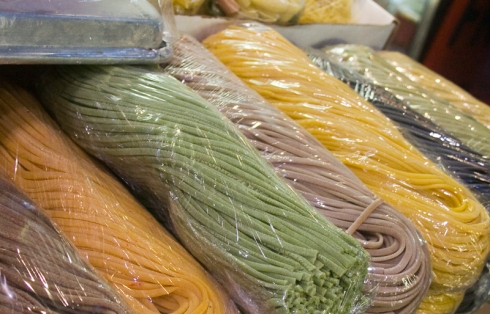 Fresh pasta made at the market

A friend of my mom's asked her for some dog bones next time she went.. maybe she didn't want them that big!

After we left the market, we went to Kensington Market to get tortillas.. and while we were there, we also got some churros 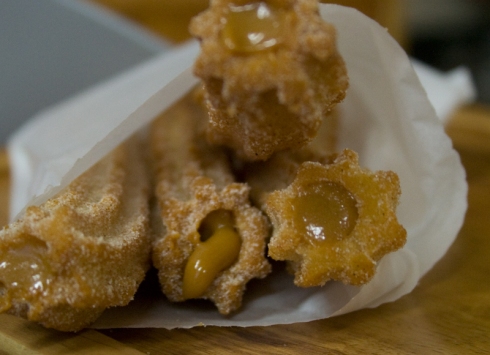 I must admit, they looked better than they tasted

After all that excitement during the day, we came home and it was nap time! When I woke up, my sister was home and I hung out with her for the evening at home. it’s nice to have a relaxing weekend.

Today, my dad started uber early! When you’re in Toronto, it’s better to be there way early so you don’t miss your flight!

It was very foggy when I got to the gate

The fog lifted just in time for the sunrise. Soon after I took this photo, it got cloudy again...

Back in Austin! Yay!! Too bad one of my bags didn't make it back with me...

It was beautiful when I got back… I was very excited 😀

This is so much better 😀

I’m glad to be home and the cats were not exactly excited to see me… Dusty stayed on the bed and didn’t even come out. Eddie warmed up to me after a few minutes. Since I didn’t get my bag, I waited for it to be delivered and missed AG’s birthday party 😦 Big party tomorrow.. can’t wait!

This morning, I woke up to my sister tapping me on the  forehead. Last night, she said if we were to go Boxing day shopping, we’d have to get up early. When I opened my eyes, she asked me if I wanted to go shopping and after I thought about it, I decided to go for it. My dad, mom, sister, and I got dressed and went down to Sherway Mall to check out the sales around 9:30; the mall had opened at 8am.

We saw this mannequin at The Bay [a department store]

Me: "I think she forgot to wear a bra" D: "No, I think she did it on purpose *whispers*I hear she's a slut"

One of the first stores we went into was Lululemon.. but prior to going in, we had to line up.

We've lined up for Lululemon before and this was a pretty short, fast-moving line

While in line, they were doing trivia questions and they asked who the founder of Lululemon was.. and I only  knew his first name [Chip] so I said “Chip something” and since no on else knew it, I got a free headband 😀 Once inside, I saw they didn’t have many things that appealed to me. I bought a running skirt and my sister bought a top.

We shopped around some more but I didn’t find anything else. My dad was the only one who bought anything else on sale. After the mall, we dropped off the parents at home so D & I could pick up her Wii since she wanted us to pass Super Mario Bros Wii on her system and then we realized we needed a couple more colours for decorating cookies for A’s family’s dinner, so we went to Michaels. On the way home, we stopped at Tim Hortons so my sister could get some coffee and I saw they’re garbage cans — they include recycling for paper and other recyclables!

Once we got home, we prepped a few cookies…

Yup.. they're meant to look like Tiffany's boxes.. what girl doesn't love to get those?!?

After I decorated the cookies, D had to go get ready to go over to A’s relatives for dinner. I decorated some more, then it was WII TIME!!!

I got this error yesterday too but it started working again .. today, it still didn’t want to read the discs so I played some Virtual Console games. I should have put it in my carry-on but there was no room.

While D was gone, Buster got really sad..

Yup.. he was moping around when D left...

We’re thinking it’s because she moved out and she hasn’t been home as much as she has this weekend since then. He previously had abandonment issues and I’m actually not joking: my cousin shipped him to me, I brought him here, and Cookie the cat left him (well she was put  down, but he didn’t know this) . He used to act up a lot when he was younger until he realized he was here to stay. A hasn’t been here and he’s upset with him too… So I went and grabbed him and hugged him and made him sit with us, and he was looking a little better

Sitting between my mom and me

The “Sex and the City” movie was on and I started watching it, and my sister came in about a third of the way and she enjoyed it.

Tomorrow, D and I are going to Niagara Falls and the casino after work.. I’m hoping to win some money to get a new Wii.. wish me luck!!